Posted at 22:35h in Current Resident by admin 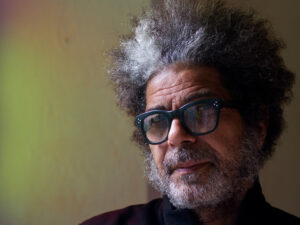 While in residence at El Espacio 23, Juan Carlos Alom is organizing a series of workshops for artists working in 16mm film.

“One of my favorite mediums is 16mm film. On the one hand, it slows down the creative process, and on the other, it allows for the sorts of surprises and accidents that are at the core of my expression, even when I’m not working with that “anachronistic folly.” In my most recent work in documentary with digital cameras, I rely on what the analogue and 16 mm cameras continuously teach me about the value of adjusting the velocity of one’s creation in order to see the world through a different prism.”

Juan Carlos Alom was born in Cuba in 1964, is a filmmaker and photographer who has exhibited throughout Cuba, the Americas, Europe, and South Africa. Starting his career as a photojournalist in 1990s Cuba, Alom developed an artistic vision that was informed by the need for spontaneity demanded by that period of crisis. Among the films that Alom has directed are Una Harley recorre la Habana (1998, “A Harley Travels Around Havana”), Habana Solo (2000), Evidencia (2001), Iroko (2004), Diario (2009). A retro-spective of his 16mm films was screened at the 2018 Los Angeles festival “Ism, Ism, Ism: Experimental Cinema in Latin America.” Recent group exhibitions include “Without Masks: Contemporary Afro-Cuban Art,” Audain Gallery, Museum of Anthropology, Van-couver, Canada (2014) and “On the Horizon,” Pérez Art Museum, Miami (2017), among many others. Solo exhibitions have taken place at San Francisco Art Institute, Buzz Art Gallery, Miami; University of Connecticut Jorgensen Gallery; and El Apartamento Gal-lery, Havana. His work is held in permanent collections at Cuba’s Museum of Fine Arts; Los Angeles County Museum of Art; Ludwig Forum for International Art, Germany; Fototeca de Pachuca, Mexico; the Pérez Art Museum; the University of Texas’s Blanton Museum of Art; Museo Reina Sofia and Tate Modern (UK). In 2000, Alom was selected by Time Magazine as one of the photographers of the millennium in Latin America.